No matter what current song or technique you’re working on in your guitar lessons, behind the scenes you are training your mind, muscles, fingers, and nervous system to be a great guitar player. The happy work is learning a new tune, showing off for your friends, or jamming with other players, but the real growth as a guitar player comes from having the discipline to consistently and rigorously train your body to do the things that make a guitar player great, and do them on auto-pilot. The key here is to develop a strategy, a practicing plan, and repetitively execute that plan until your fingers know the way on their own; you choose to play something and the mind, muscles, fingers, and nervous system fire in synchronicity, almost like magic. Once that happens, your playing becomes more about the emotional content of what you’re playing than it does about the physical or mechanical part, and your guitar lessons start to pay dividends.

In the last post, we concentrated on developing finger control using pairs of fingers. You should have gotten a good amount of control by now pairing fingers 1 and 2, 1 and 3, 1 and 4, 2 and 3, 2 and 4, and 3 and 4. In this exercise we are going to use or fingers in groups of three. Use the same approach of placing your fretting hand on a table, palm down, and while keeping the unused fingers still, execute the following patterns:

Concentrate on the hinge mechanism at the knuckle where the finger joins the hand and raise and lower each finger independently in exercise order. Musically imagine you are playing triplets instead of pairs of notes to develop a “feel” for the exercise as you perform it. 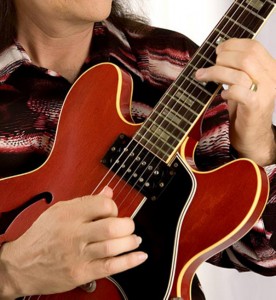 Let’s take what we’ve learned to the guitar. I want you to take the first exercise and the second exercise and place them on the guitar in the following way:

Beginning at the fifth fret and going across the strings from the sixth string to the first string and back again, dedicating the first finger to the fifth fret, the second finger to the sixth fret, the third finger to the seventh fret, and the fourth finger to the eigth fret, play each of the finger pairs, including 1 and 2, 1 and 3, 1 and 4, 2 and 3, 2 and 4, and 3 and 4. Make sure you are pressing with the tip of your fingers and playing each note as close to the fret as possible without touching it. Practice playing the pair on each string with a down and then up stroke with your pick or alternating fingers if you play finger style.

If the span of your fingers is at first too uncomfortable at the fifth fret, you may begin at the tenth fret where the frets are closer together. Get a good stretch. Eventually, you will need to be able to play this at the first fret where the fret distance is its maximum. As with any guitar lessons, be flexible enough to adapt what is being asked of you to where you are at the moment.

After becoming comfortable with playing the pairs of fingers, do the same thing with the triplets, playing across the strings and then returning to the sixth string. Play with a triplet feel. The only difference with your picking will be that as you play three notes per string in an alternating way, you will play down, up, down on the sixth string, up, down, up on the fifth string, down, up, down on the fourth string, and so on.

Make sure you use good finger pressure and are close enough to each fret. You can tell if you haven’t because you will get an undesirable buzzing sound out of your guitar. Play evenly and with control. Don’t play faster on the parts that are easy and then slow down on the parts that are more difficult.

If you own a metronome, use it, but set it at a tempo you can play at with no mistakes. Only gradually push the tempo to a faster speed as you get enough control to play with no mistakes. This is a great practice when working on any of your guitar lessons.

Good luck, and remember, there really is no replacement for face to face guitar lessons.

We’d love to hear from you! Please make sure your comments pertain to guitar lessons.

David is a lifelong guitarist and songwriter, with a highly developed knack for producing and arranging. He spends a great deal of time mentoring and coaching aspiring music artists and songwriters to rise to the pinnacle of their abilities. Music definitely is a language we all can understand. Connect with David on Google+.
View all posts by David Randle →
This entry was posted in Guitar Lessons. Bookmark the permalink.